The final day of our Barcelonnette trip took us to the highest mountain pass in Europe, according to the local signs. The Cime de la Bonette, is 2,807 metres (8,701 feet) above sea level & the plan was to do an out & back route to St Etienne de Tinee which would involve climbing both sides of this enormous mountain.

Once more we woke to clear blue skies overhead, & the first 6 miles of the ride replicated our route on Sunday as we headed to Jausiers. There was plenty of graffiti on this stretch of road, as the Tour de France passed through Barcelonnette & Jausiers this year, on the stage that took in Col de Vars, Col d’Izoard & Col du Galibier. We also passed a couple of pieces of cycling related memorabilia on the way.

After 6 miles, we took a right turn & almost immediately the road started climbing. While the climb is 14 miles in length, it had a constant gradient, which meant I could get into a rhythm & take in the big mountain views all around us.

We’d climbed the Col de la Bonette from Jausiers on a previous visit, so knew that at about the halfway point of the ascent was a great little café & this was our first target & we weren’t disappointed when we reached Halte 2000 – we had a delicious slice of Blackcurrant plan & a cappuccino, as well as purchasing a Col de la Bonette fridge magnet for collection!

As we left Halte 2000, we started climbing a set of switchbacks, giving huge views to the mountains on the far side of the valley. The gradient briefly eased off as we headed towards the Fortin de Restefond, a military barracks originally built in !901 as a defensive barracks.

As we continued climbing, we could see an alternative gravel route to our right & we caught our first view of the Cime de la Bonette, a 2km extension of tarmac with huge views of the surrounding peaks.

We quickly descended to the Col de la Bonette, then set off on an exhilarating 16.5 mile descent to Saint-Etienne de Tinee, stopping briefly for lunch at Restaurant Pratois (I was too hungry to take a photo!). There were some roadworks on the outskirts of town & as we had a green light, we carried on over the newly laid tarmac – big mistake!! As we rolled over the new tar, it stuck to the tyres & then the grit stuck to the tar…….we spent about 30 minutes cleaning the worst of the grit & tar from the tyres so we could continue our adventure.

Turning round in town, we took to the path to avoid the new tarmac & then followed a babbling brook as it gently climbed for a couple of miles until we reached the start of the climb as we re-joined the M2205. Waterfalls lined the valley walls & it was at this point that a group of Porsches shattered the peace & quiet as they roared past us.

At this point, the valley opened up in front of us & gave us a view all the way up to the pyramid shaped Cime de la Bonette some 12 miles away & 4,000 feet above us. The road twisted & turned its way up the mountain, passing through a couple of small villages before heading through Camp des Fourches, another military barracks built at the start of the 1900’s.

Looking below, we could see the lower slopes of the climb, as well as having regular reminders of what still faced us – there were markers every kilometre, showing how far remained to the summit, as well as the average gradient. After 2½ hours of climbing we’d reached the Col de la Bonette, where we stopped briefly for a photo.

The 13 mile descent back into Jausiers was over in 30 minutes & it ranks as one of my favourites – switchbacks galore & long sweeping corners on a deserted road, this was cycling heaven! All that remained was to retrace our cycle tracks back to Barcelonnette, where we quickly showered & went out to celebrate the end of another epic Alpine Adventure. 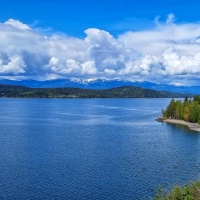 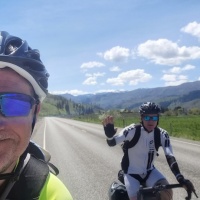 Scroll to Top
My Cycling Challenge

The latest news on WordPress.com and the WordPress community.